As one of the largest teams of independent wind consultants in Germany we offer wind resource and energy production assessments as well as related services of which an overview is given on the following pages. In addition, some relevant examples are presented here. 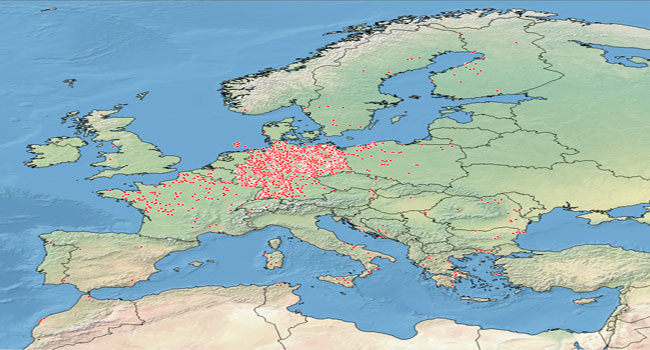 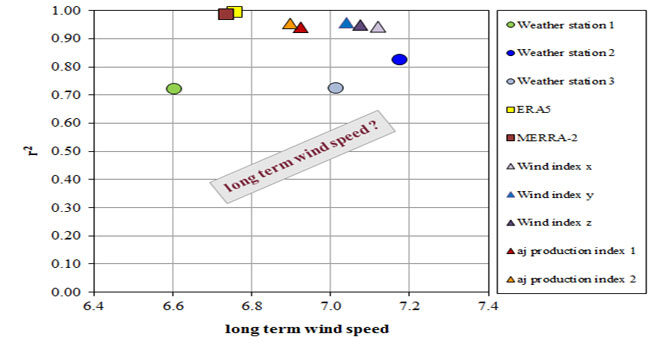 The purpose of wind resource and energy production assessments is to determine the mean wind resource of sites and the long term mean annual energy production of wind farms that are planned, under construction or in operation. These assessments are the basis for the negotiations between project initiators, developers, investors, financing parties and turbine manufacturers.

On the market, the wind resource and energy production assessments elaborated by aj are considered as particularly reliable and well explained. Banks welcome our reports particularly.

In Germany, the standard approach is to derive the wind resource from the energy production of existing wind turbines in the surroundings, whilst site specific wind measurements are used as a basis in other countries (but also increasingly in Germany). The production data respectively the wind data used in these cases must be scaled to long term mean situations and then transferred from the positions of the existing turbines respectively the wind measurement to the planned turbine positions and their hub heights.

aj is particularly experienced in the in-depth check of available production and wind data on plausibility, disturbances, technical faults and erroneous information. Any available information is used (e.g. not only from the top anemometer of the mast but from all anemometers), in order to obtain the most complete picture of the wind flow. This approach, which is pursued on all levels and matters, is the most relevant particularity of aj on the market and allows us to achieve lower than common uncertainties.

To scale the existing data to the long term, data and procedures developed in house are used as well as data sets which are readily available on the market, as appropriate. Standard software tools are used for the extrapolation in space and for the production calculations. Detailed plausibility checks are considered highly important in this context. If experience or general considerations suggest that the most realistic results differ from those obtained with the calculation programs, corrections are applied in order to get closest possible to reality and to minimise the uncertainty.

When scaling data to the long term, a number of reference data sources are used in parallel, often even about 10 sources across three or four fundamentally different kinds. For Germany, own production indices are elaborated and permanently updated which are based on the operational data of long term operational wind turbines. These indices allow for verifying the common BDB indices independently. Wind speed data are extrapolated to the long term using an own, very detailed procedure. The results of long term extrapolations of aj have changed less over the years than those of many other companies. Changes in particular reference data sources usually affect our results only to little extent.

The wind flow modelling is preferably based on on-site wind data or on SCADA data of wind turbines in the region, since this leads to more realistic results than met station data.

The Technical Guideline no. 6 of the Fördergesellschaft Windenergie und andere Dezentrale Energien is followed by aj as far as this is sensible and feasible. 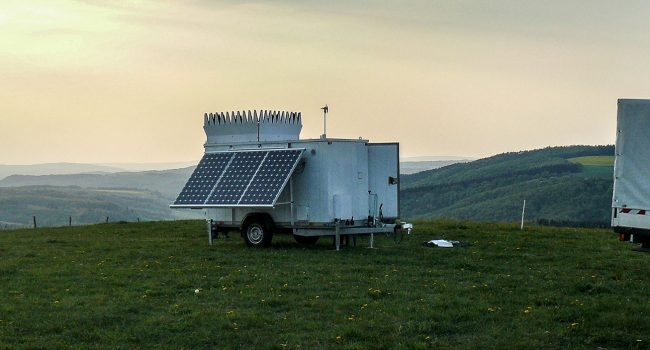 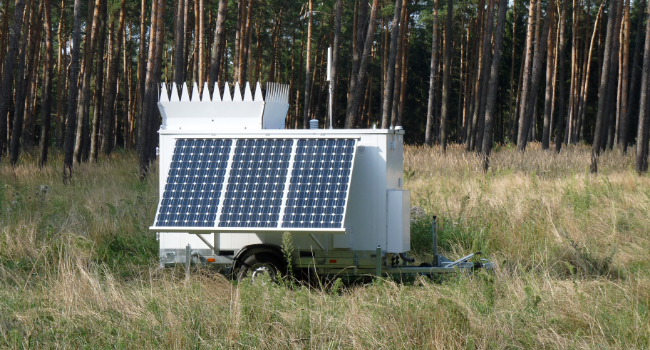 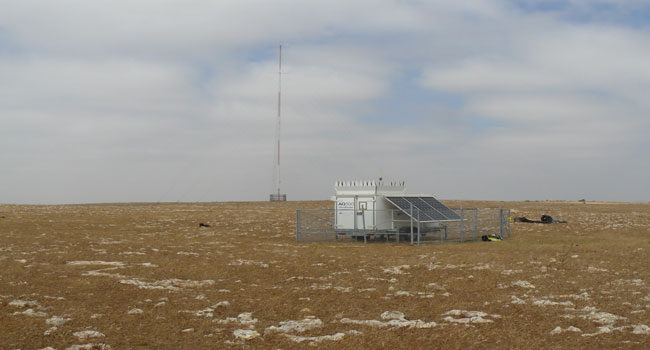 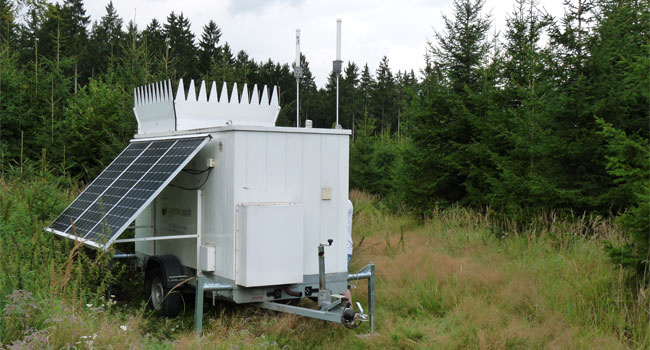 The staff of aj profits from more than 30 years of experience in measurement techniques for wind energy. In the meanwhile, wind measurements have become one of our core activities. In Germany, mainly Sodar instruments are used for this purpose, since the instruments selected by aj are particularly reliable and offer the best cost/benefit ratio for wind measurements at large heights.
In the meanwhile, aj owns 10 high quality Sodar instruments of the types AQ500 and AQ510 WindFinder of the manufacturer AQSystem. These are permanently in operation in a large range of landscapes.
The accreditation, that has been achieved by aj in 2018, is of specific interest in the area of wind measurements. Combined with the classification of the Sodar instrument type AQ510 used by aj, fully TR 6 compatible, i.e. bankable wind measurements are now available at low cost which in addition allow for low uncertainties. The background is that lower measurement uncertainties can be allocated to wind measurements performed by companies with corresponding accreditation. This makes projects taken care of by aj even more economic.
The operational results of several wind farms confirm the results of aj wind resource assessments based on our Sodar measurements!
Short term wind measurements with Sodar instruments deliver fast and at low cost important initial information for first estimates (see short assessments) and many aspects of strategy finding.
All Sodar instruments owned by aj have been verified against met masts, some of them even repeatedly. The Sodar wind measurements of aj are in agreement with the requirements of the German TR 6 guideline.
aj also uses Sodar instruments for fast and cost efficient verification of the power performance of wind turbines. With this, aj has already contributed to the improvement of power performance.
Since 2003, aj performs met mast based wind measurements both in Germany and outside of Germany. Even under extreme site conditions, aj achieves high data quality and availability.
The measurement strategy is an essential element for a successful wind measurement that best serves its purpose. aj provides advice on all aspects of measurement strategies, among others

The wind measurement may be supervised and documented either by aj or by your staff after our training. Besides transferring our know how, we can provide any necessary equipment for performing the wind measurement.

Besides wind measurements to determine the wind resource, aj has extensive experience in:

At a very early stage of the planning process, a very reasonable step may be to pre-evaluate the site or the region with respect to the wind resource and further relevant aspects. Through this, the first strategic decisions can be made very easily and at a very cost-efficient level before the costly processes like wind measurements, contracts or further approvals need to be scheduled.
At aj, the short estimates are based on production data of existing wind turbines in the surroundings of the planned site. Thus, the same procedure is used as in full wind resource and energy production assessment reports which is much more reliable as carrying out short estimates on the basis of model calculations only. Through this, potential risks can be identified much easier and additional steps, such as wind measurements or the need for production data of further turbines, can be planned, if necessary, much earlier.
With respect to the tenders, these short estimates on the basis of a short term wind measurement can provide an immense strategic benefit.
Already after a measuring period of approx. 3 months, a sufficient reliable evaluation with regard to the energy production is possible. Particularly, the frequency distributions of both the wind speed and the wind direction as well as the turbulence intensity can be determined very precisely via these short term measurements so that further decisions about the planned turbine type, the layout of the wind farm or the load on the turbines can be concluded from that.
Whilst the wind energy production of a wind farm can only be predicted reliably on the basis of at least one year of on-site or near-site data (i.e. measured wind data or production of nearby wind turbines), it is often strategically beneficial to decide upon the turbine type and wind farm layout at a relatively early stage of development, i.e. before the wind resource is well known. For this purpose, aj offers early stage site condition assessments and wind farm lay-out studies. If a wind measurement has been lasting for a few months, the relevant parameters can often already be determined with the accuracy necessary for this purpose. Of course, seasonal effects must be taken into account in these cases. If a wind resource study is based on production data of nearby turbines, aj determines the most uncertain parameters on the safe side specifically for this purpose, which will allow for acquiring a building permission on safe grounds.

In many cases, the energy output of a planned wind farm could be maximised through optimizing the lay-out of the wind farm. This can be achieved without additional load on the wind turbines. The long term experience of aj in the operational behaviour of wind turbines can be used here to elaborate optimized lay-outs which also take into account general requirements such as an elegant appearance, low infrastructure cost etc. Often solutions can be found which lead to a noticeable gain of energy yield for relatively little cost. Here you can find an overview about some projecs of the recent past.

Over many years, aj has acquired an extraordinary extent of experience in the analysis of the operational behavior of wind turbines in order to, e.g.

If needed, aj performs additional measurements on or near the turbines for this purpose.

This area of activity displays well the innovative and flexible spirit of aj and uses fully its broad background on wind turbines and wind fields.

Which long term energy production does your wind farm yield in reality? aj determines this based on the recorded operational data, often using the 10 minute SCADA data. As part of this work, the energy lost in the past due to failures or other downtime (e.g. curtailments) is quantified in detail. If possible, the long term electrical losses are also derived from past data.

Due to its long term experience, aj is especially qualified to evaluate a project with respect to site suitability, wind resource and energy assessment at every single stage of the planning process. In this framework, aj offers project specific flexible approaches which are focussed on the results.

With its background on turbine design and operational behaviour of wind turbines on the one hand and its experience on wind fields, in particular from the examination of wind measurements on the other, aj delivers site suitability assessments which consider all relevant aspects realistically and competently. This includes issues which may be relevant but have not been considered in current standards. Often, it is beneficial for the constructive progress in a project if aj liaises directly with the site assessment department of the wind turbine manufacturer in question. aj has even provided advise to turbine manufacturers in this context at several opportunities.

aj permanently carries out research, often at own cost, to improve the quality of the work. Research topics were in the past, e.g.

aj is happy to dissipate the know-how that has been achieved and has therefore carried out training on a large range of topics. The emphasis was on the evaluation of wind resource assessments (for developers, investors and financing parties) and measurement techniques.
Projects
Diese Website benutzt Cookies. Wenn Sie die Website weiter nutzten, gehen wir von Ihrem Einverständnis aus.OKDatenschutzerklärung